Written by Dor
Updated over a week ago

The grace feature will help you miss fewer signals by allowing you to define a percentage by which to extend the first entry price range, making it more likely that your entry will be filled. Let's dive in and see how it works in detail.

For a video tutorial about the Grace feature, watch the following:

To modify the First Entry Grace parameter, visit the following path in the Telegram bot:

What is it trying to solve?

Both cases are especially common in cases where the signal is posted on a symbol with low-liquidity where a relatively small trading volume can significantly affect price movement (and create walls in the order book).

The purpose of the Grace feature is to help you avoid cases like the ones mentioned above where the signal entry price is reached (or crossed) but your trade orders might remain unfilled.

How does it work?

When the grace parameter is set in your trading configuration, as soon as the first signal entry target price is reached, Cornix will immediately activate the grace option in the trade that was created for you automatically. When the grace is activated, Cornix will iteratively increase the first trade entry target price by small intervals until the order is filled, or until the maximum price as defined by the grace value is reached (that maximum price will be equal to the original entry price + the grace percentage). After reaching that maximum order price including the grace, Cornix will stop updating the order price and the order will remain open in the exchange until it is filled or canceled (just like any other regular order).

In effect, using the grace feature will allow you to extend the potential entry price range making it less likely you will miss signals that reached at least one entry target.

If this doesn't make sense yet, please continue to go over the example below.

Please note that as explained above, Cornix will only apply the grace percentage to the trade's first entry once at least one entry target is reached in the signal. This means that the grace will not help you in cases where the signal price never reached the entry price range.

Let's take as an example the following long signal on ADA/BTC: 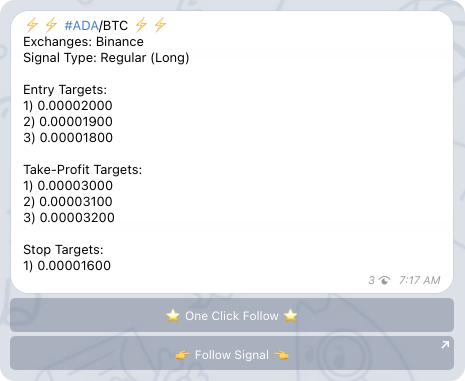 Let's assume the signal was created when the price of ADA/BTC was 0.00002200. In this case, as long as the price stays above the first entry price (0.00002000) the grace parameter does not take effect and will not modify the trade in any way.

Now, let's assume the price of ADA/BTC decreases until it reaches exactly the first entry price at 0.00002000 before going up again and reaching the first Take-Profit target at 0.00003000. In this case, let's consider what would happen when the grace parameter is set and when it's not set in your trading configuration:

Please note that both examples assumed the trades were created without trailing entry. When trailing entry is used, the grace parameter will be ignored and will not affect the trade behavior.

Did this answer your question?