Written by Dor
Updated over a week ago

This deserves a special section as it can sometimes be confusing, so we will just recap on it.

Nothing special is needed, the bot will automatically check what the target price is vs the entry and know which way you intend for it to go unless otherwise specified in a guided creation. (Figure 1) 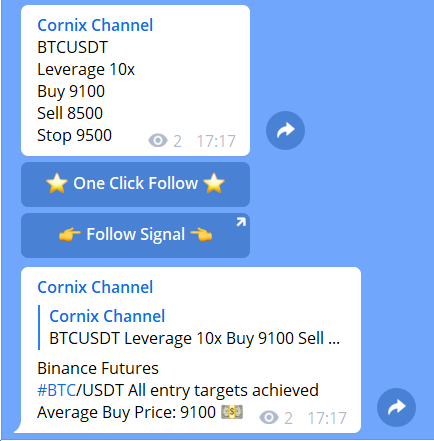 Channel Messages: This is very important to keep in mind as it can create some confusion both for admin as well as users. After a signal is posted the system will track the pricing on the exchange it was intended for and deliver some rudimentary messages on the pricing movement. In the above example in figure 1 the entry price was achieved and the message was delivered to the channel. This price could have only touched the price in the exchange and it will report, but in reality, for users, the situation might be very different, as their orders are likely still stuck in the order-book waiting. Profit channel messages indicate the potential of profit on that signal if 100% of the coin were to be sold at that particular. It's important to note that channel messages do NOT take channel configuration into account, apart from one exception, being the stop loss trailing. If stop loss trailing is present and the target is hit and then the stop loss moves, and subsequently also hit the new message will include both TP and stop loss. Channel messages consist of entry messages, take-profit messages, and stop-loss messages. These can be disabled on any channel but will require contacting Cornix support.

Specifying Entry Zones rather than prices: The admin has the ability to specify a buying range rather than specific pricing. Signals of these type has a different look on the entry section, seen in figure 2. 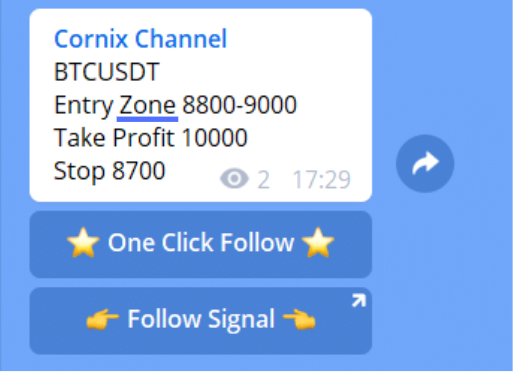 The number of entries for signals with an entry range rather than specific pricing is controlled on the user side under Strategies > Entry Zone - Number of Targets. It's also important to note that signals with a buy range will not show an entry achieved message, as it's not possible to know what price is entered into the range.

Did this answer your question?